The Concert for George 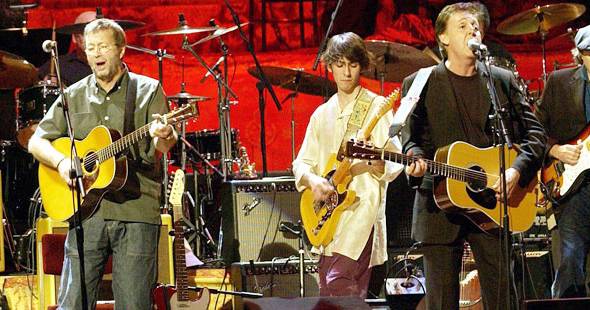 Rock music’s most celebrated musicians gathered at London’s Royal Albert Hall on November 29, 2002 to pay tribute to one of their own, the legendary George Harrison, on the one-year anniversary of his death. On that magical night, Harrison’s closest friends gathered to perform a collection of his music for a live audience. Far more than a concert film, CONCERT FOR GEORGE is a soulful cinematic tribute to a musician whose vision transcended the ordinary and whose talents contributed to a revolution in the music industry. Under the musical direction of Harrison’s longtime friend Eric Clapton, the film captures an emotional gathering of musicians including Jeff Lynne, Paul McCartney, Tom Petty and the Heartbreakers, Billy Preston, and Ringo Starr. Truly a rare moment in music history, this documentary showcases these legends of music not likely to perform together on the same stage again. CONCERT FOR GEORGE is masterfully directed by famed British director David Leland, whose credits include WISH YOU WERE HERE, HBO’s BAND OF BROTHERS television series, and The Traveling Wilburys video “Handle with Care.”