Chasing Magical Orbs of Light in the Forest

Posted by Lisa Mazzarella on 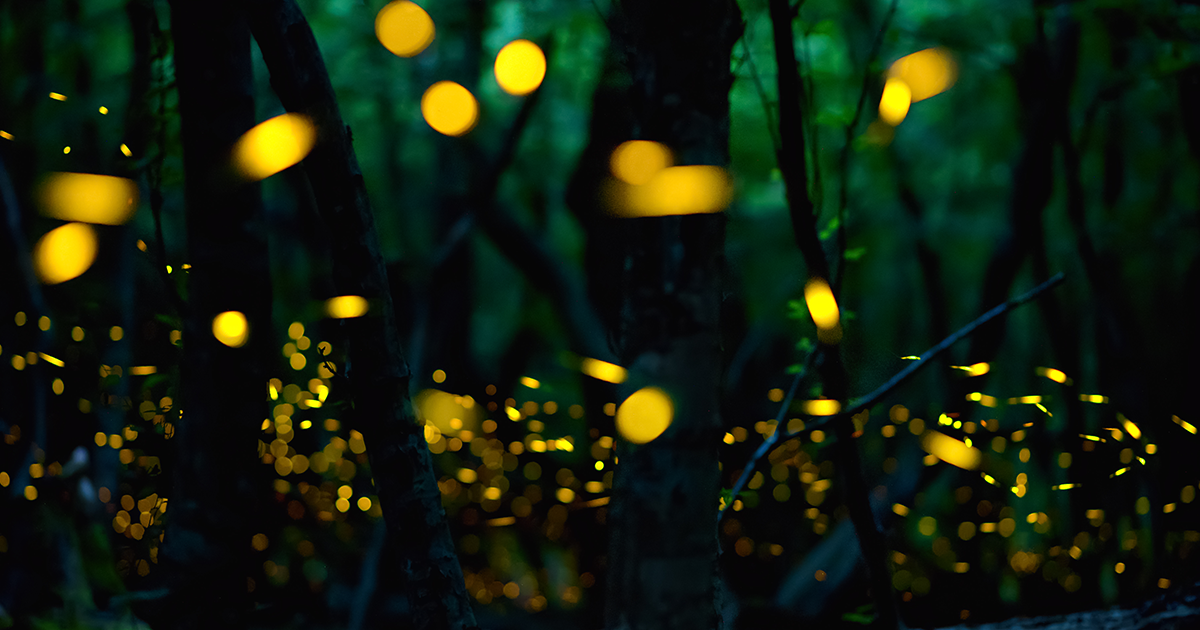 Longer days, warmer temperatures, and the time to create good memories. Keystone edition's Lisa Mazzarella sheds some light as we look forward to the hazy days of summer

When you really stop to think about it, some of our sweetest summer memories are based in simplicity. Whether it's trying to keep up with melting ice cream running beyond the borders or a cone, or maybe, when it got dark, taking a mason jar and trying to catch fireflies. It was a curious time, connecting with these magical orbs of light. But in truth, these harbingers of summertime are complex insects. Dr. Sarah Lower, an associate professor of biology at Bucknell University in Lewisburg. She shares the facts—and the fascination—with fireflies.

(This conversation has been lightly edited for brevity)

Dr. Sarah Lower: My introduction to fireflies is in the south, they have this species called the blue ghost firefly. This was one of the first firefly species that emerge in the spring. It's a very tiny species and they have a dim blue glow, they do not flash. They grow and fly low above the forest floor, and so one night, we had heard there's this one site where the blue ghosts were out, so we trekked three hours up into the mountains of north Georgia to go see the blue ghost fireflies. We're walking to this field, and it starts getting darker and darker, and then it's pitch black. No moon that night, and the forest is just totally dark, and you walk just a few feet into the forest and all of the sudden you're surrounded by these floating fairy lights in the forest. And that just got me. That fascination with the blue ghost, the mystery of the lights in the forest.

One thing that I think is important to know is that there are over 2000 firefly species worldwide. They're on every continent except for Antarctica, and so that means that catching fireflies in the summertime is a nearly ubiquitous human experience.

Well there's something about the gentility of the firefly, the butterfly, the praying mantis, that's something that I gravitate toward. The ladybug, anything else with a harder shell, I'm freaked out of.

But what I'm amazed about is how the fireflies are able to produce that light. When we were children, we called them lightning bugs. How does that happen?

That is the result of a chemical reaction that takes place inside a special organ, we call it a light organ or a lantern, and there's a special cocktail of chemicals that they use to produce light, one that's called luciferase, one that's called luciferin, they mix these 2 together with a little bit of energy, some oxygen, and then it produces a photon of light. And this is one of the most efficient light reactions that we know of. All of the energy is going to produce light. None of it is heat, so it's a cold light.

Because they produce this cold light, and they're doing it every few seconds or so, just like the light bulb…you know when you have a light bulb on for a long time, it wears out, it wears down, the longevity of that light bulb gets fainter and fainter. Does that happen with the lightning bugs?

That is a good question. I don't think we quite know the limits. They have to recycle these chemicals, so once they use it, it's used up. They have special other chemicals in their light organ that they use to recycle these and put them back into the active form. We do have evidence that making the light is not that energetically expensive as compared to the other things that they are doing. If you think about flying around, looking for a mate, that takes a lot of energy. All the wing beats, they're going long distances, whereas flashing one second of light is actually not that expensive, mechanically speaking.

So, what is the magic behind this? Bioluminescence, is that correct?

Now do any other insects have this bioluminescence quality to them?

You were recently among a team that sequenced genomes of two firefly species. What did you discover? What did you find?

We were trying to hunt down the origins of the bioluminescent chemical. These chemicals are produced by genes in the cells of the firefly, and we wanted to know, are they all the same gene? The bioluminescence and this particular gene that makes this chemical evolve once in beetles and then thereafter you get bioluminescent fireflies and bioluminescent click beetles, and bioluminescent railroad worms…these are all relative, or is bioluminescence evolving multiple times? What we found is evidence that bioluminescence actually evolved multiple times. It's actually at least twice. We are fascinated with light and it's a light when you are out as a kid running around carefree at sunset on a summer evening, and it's a light in that sort of murky shadowy sunset dusky time, and we're just fascinated by that. So, I do think they're so mysterious. When I go out with my students, we take nets and jars. It's very sort of low-tech, and we go out and we'll catch them with our nets and put them in our jars, but the key is no air holes. And you can put in a piece of apple to keep it moist, or even a bit of damp paper towel. Most fireflies that you collected were probably males, because those are the ones that you generally see flying around and flashing. Females are more cryptic, meaning that they're sort of inconspicuous, they're hidden down in the vegetation. They don't flash as much as the male would.

What was your interest in wanting to find out more about the bioluminescence of fireflies and certain species?

I'm really interested in fireflies because we think we know them. They are that familiar insect that you go out and you catch as a child, but when you start to read about their natural history, you find out all these really almost dastardly things they do. Most firefly species are toxic. They have a toxin called lucibufagin, the cardiotoxin, to avoid predation. And there's one group of fireflies called sartouris, that have lost its ability to produce the toxin, and instead, females of the toxin-less species will actually eat the males of the species that do have that toxin, to gain that toxin and put it into their own eggs for protection. Flashes that you see are generally mating signals, they're fireflies sort of talking to each other, communicating in this sort of beautiful summer dance. Just enjoy them.

A conversation with Dr. Sarah Lower, of Bucknell university in Lewisburg. She says when the summertime ends, a different species of winter fireflies brave the colder weather. And although the light show is notably muted, the curiosity about these tiny insects is just as fascinating. For Keystone Edition, I'm Lisa Mazzarella.