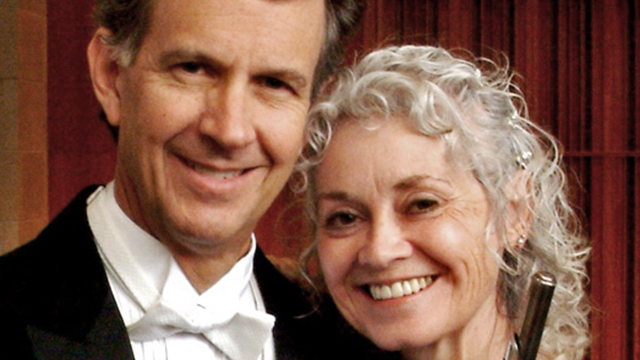 To reserve your seats for this concert, click here .

This husband and wife duo first performed in the Simply Grand series 20 years ago in November 1995. For Barry this will be his fifth appearance in the series, so as veterans of the concert series it seems appropriate to open the 25th anniversary season with a performance by these two outstanding artists. The program will include music by composers such as Bach, Debussy, Prokofiev and Schumann.

Of flutist Mary Hannigan’s playing one reviewer noted, "Some in the near-capacity audience were moved to tears."

Ms. Hannigan has recorded for S.C.I. and performed widely across the United States as soloist, concerto soloist, and chamber musician.  Notable performances include Market Square Summerfest in Harrisburg with the Ying Quartet, the national convention of the Music Teacher's National Association, and the McGraw-Hill Young Artist's Showcase for radio WQXR in New York City.   Ms. Hannigan has been a member of the Harrisburg Symphony since 1984.  She performs with her husband, Barry Hannigan, pianist, and “esprit!” a flute and harp duo with Rebecca Kauffman (www.esprit-flute-harp.com).

Ms. Hannigan teaches Performance Studies in Flute at Dickinson College, where she is a member of the Faculty Wind Quintet. She has also taught at Susquehanna University, Bucknell University, Wilkes University and Colorado College. For many summers she was on the faculty of Rocky Ridge Music Center in Colorado and performed on the Music in the Mountains concert series. Hannigan's students have won recognition at the national and state level on many occasions.  A former student holds the piccolo position in the Chicago Symphony; others have been selected as masterclass performers for the National Flute Association Convention and have performed on National Public Radio's "From the Top." Several different students have won first flute in all-state band in Pennsylvania.

Barry Hannigan is the Ellen Williams Professor of Music at Bucknell University.  He made his New York debut in Carnegie Recital Hall in 1984 and has since received rave reviews in major cities across the United States.  Paul Moor of Musical America wrote:  “…he absolutely bowled me over…with his extraordinary proficiency.”  Hannigan made his European debut at the Edvard Munch Museum in Oslo, Norway, and has subsequently performed in Russia, England, China, Ireland, Norway, and New Zealand. He has appeared as guest artist at a host of American universities, such as UCLA, Yale, Cornell, and the Universities of Oregon, Colorado, Illinois, Arizona State, and Texas.

Festival and series performances include venues such as Real Art Ways in Hartford, the Syracuse New Music Society, Wildflower Festival, and Roulette in New York City.  Dozens of his performances have been aired on National Public Radio affiliate stations across the U.S.  He is the recipient of many awards and prizes, including those from the Ford, Belin, Surdna, and Presser Foundations.  For three years he toured Pennsylvania promoting works by living Pennsylvania composers, underwritten by grants from the Pennsylvania Council on the Arts.  He has also received a Solo Recitalist Grant from the National Endowment for the Arts, an award intended to recognize the nation’s outstanding recitalists.

Hannigan has recorded for Opus One, SEAMUS, Seesaw Music, SCI, and Radio Telefis Eireann in Dublin, and has released four solo CDs for Black Canyon Records. Sample performances with orchestra include Rachmaninoff’s Paganini Variations with the Omaha Symphony and a chamber concerto written for him that was premiered with the Pittsburgh New Music Ensemble. Hannigan has received Bucknell University’s highest award for inspirational teaching.  His students have earned graduate performance degrees in piano at schools such as Peabody, Eastman, and the New England Conservatory.