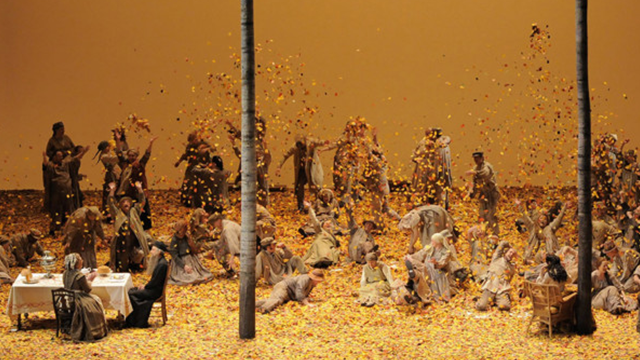 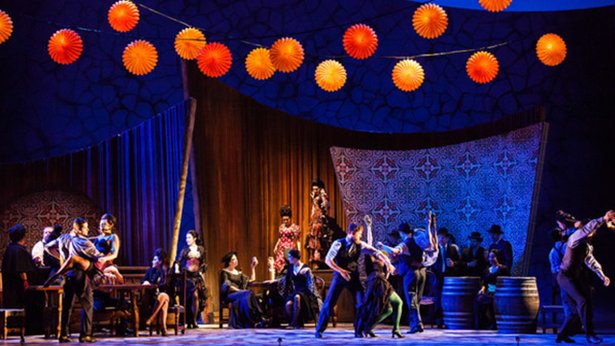 Opera has plenty of femmes fatales, but there’s only one Carmen. Her allure proves spellbinding as she seduces a hapless corporal and then a dashing bullfighter. You’ll feel the heat as you’re captivated by Bizet’s bewitching melodies — the smoky Habanera, the playful Seguidilla, the provocative Gypsy Song. Every single melody in this ever-popular opera is a beloved hit, and each is brought to life by a cast of spectacular leading artists: Ekaterina Gubanova as Carmen, Joseph Calleja as Don José, Eleonora Buratto as Micaela, and Christian Van Horn as Escamillo. Harry Bicket conducts.

It’s hard to imagine American music without the work of Stephen Collins Foster.  Foster was born on July 4, 1826 – fifty years to the day after the Declaration of Independence was signed.  In 19th century America, popular songs were churned out by the dozens, but no other composer of the day wrote as many great songs with as much sticking power as Foster.  We all grew up singing Oh, Susannah, Beautiful Dreamer, Jeanie With the Light Brown Hair, Old Folks at Home … the list goes on and on.   This one-hour program, written and hosted by Naomi Lewin of WQXR, includes those songs, and many others – plus instrumental numbers.  Among the performers: Marilyn Horne, Thomas Hampson, Itzhak Perlman, and Leopold Stokowski leading the Philadelphia Orchestra.

It’s hard to imagine American music without the work of Stephen Collins Foster.  Foster was born on July 4, 1826 – fifty years to the day after the Declaration of Independence was signed.  In 19th century America, popular songs were churned out by the dozens, but no other composer of the day wrote as many great songs with as much sticking power as Foster.  We all grew up singing Oh, Susannah, Beautiful Dreamer, Jeanie With the Light Brown Hair, Old Folks at Home … the list goes on and on.   This one-hour program, written and hosted by Naomi Lewin of WQXR, includes those songs, and many others – plus instrumental numbers.  Among the performers: Marilyn Horne, Thomas Hampson, Itzhak Perlman, and Leopold Stokowski leading the Philadelphia Orchestra.

"Let Freedom Sing" celebrates Independence Day with the Mormon Tablernacle Choir and the Orchestra at Temple Square. Julie Amacher hosts this venerable musical institution as they guide us through the canon of American patriotic music. Music selections include John Williams' "Hymn to the Fallen,"" Woody Guthrie's "This Land is Your Land, "America the Beautiful," "Yankee Doodle Dandy," and "Shenandoah." Julie Amacher hosts.

In this WVIA production host/producer Larry Vojtko introduces you to another master of classical music on the lighter side—Don Gillis. Gillis was producer of the famous NBC Symphony concerts conducted by Arturo Toscanini. We’ll hear several works inspired by the American Southwest where Gillis lived as a young man. 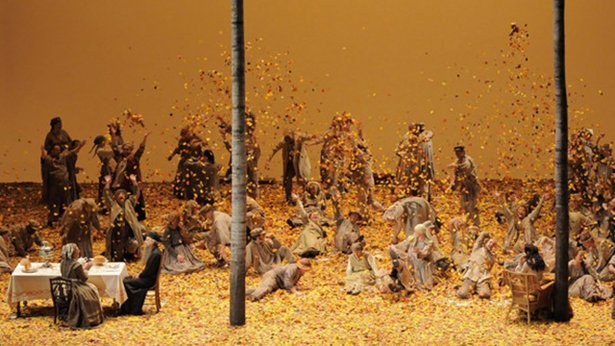 Intensely passionate drama set to some of opera’s most sweeping, soulful, and heart-stoppingly beautiful music — that is Eugene Onegin. Tatiana is a lovesick country girl, and Onegin is the sophisticated young man who callously spurns her love before realizing, too late, what a mistake he’s made. Here is Pushkin’s profoundly human, hopelessly romantic, ultimately devastating story, elevated by Tchaikovsky’s richly layered and unabashedly expressive music. Find out why Eugene Onegin is beloved by opera audiences the world over. Alejo Perez conducts this outstanding cast: Onegin—Mariusz Kwiecień; Tatiana—Ana María Martínez; Lensky—Charles Castronovo; Gremin—Dmitry Belosselskiy.

Europeans are willing to turn any building into a concert hall. The Heimbach Power Plant opened in 1907 and boasts that it is one of the most beautiful hydroelectric power plants in the world. Lars Vogt, German pianist of world renown, was captivated by its brilliant acoustic and invited his friends to make chamber music in this out-of-the-way hamlet in Germany's southwestern Eifel Mountains. From this week-long festival featuring what Mr. Vogt calls "absurdly talented musicians" we’ll hear a program of Brahms, Schumann, Debussy and Ligeti.  Host: Rick Fulker 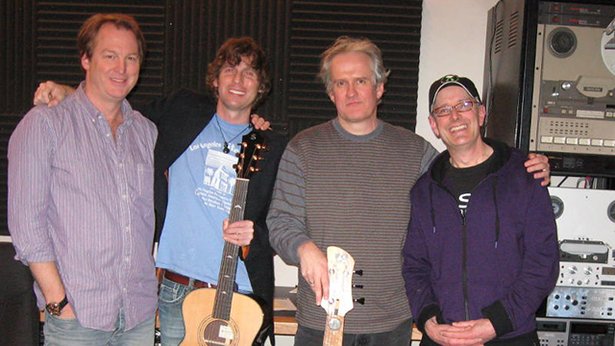 A talented singer-songwriter who tours nationally, Jesse Terry’s 2012 album Empty Seat on a Plane was featured on the weekly Mixed Bag album review series. In 2013, the Connecticut-based Terry brought his band for a session of first rate original music in an electric folk setting. This is an encore of that session.

Les Siècles is a remarkable period instrument orchestra from France. The ensemble offers ballet music of the 20th century: Prelude to the Afternoon of a Faun and Jeux by Claude Debussy and Le Sacre du Printemps by Igor Stravinsky. Also the Flemish Radio Chorus joins conductor Francois-Xavier Roth and the orchestra for a performance of the rarely heard Solemn mass for the Coronation of Napoleon by the once popular opera composer Etienne Méhul. The mass was said to have left its mark on Beethoven's ‘Eroica’ Symphony. Hosted by Rick Fulker.

Homegrown Music - Tom Hamilton and the Work in Progress Band 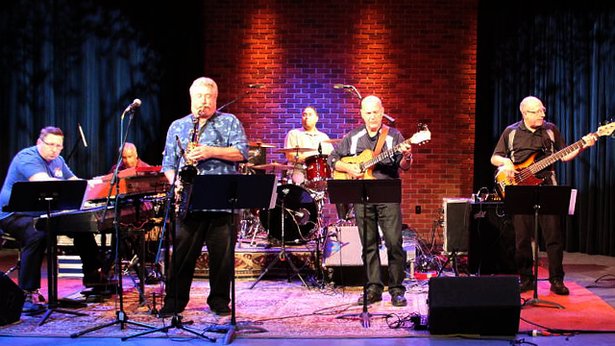 Scranton-based jazz and fusion saxophonist is a world class artist who has appeared on several recordings including as part of the late Phil Woods’ Festival Orchestra and toured with many jazz greats. Hamilton had a reputation as the ultimate side-man. But in 2014, he stepped out as leader of a group performing his original compositions, spanning jazz, funk and Latin-influenced music. He brought his band, including such notable figures as Marko Marcinko, Bill Washer and Paul Rostock to WVIA for an outstanding live performance in September 2014. This segment features all the music from that concert.

Lyric Opera of Chicago - The Daughter of the Regiment

Enjoy a classic recording of Donizetti’s sparkling comedy featuring Joan Sutherland and Luciano Pavarotti. Madcap comedy and impeccable coloratura come together as Sutherland portrays the feisty tomboy raised by a regiment of French soldiers. Pavarotti is the young Swiss villager, Tonio, who conquers her heart—and a slew of high Cs. This was the role of that led to the great tenor’s moniker, “The King of the High Cs”.  WVIA’s Peter Wynne guides us through the afternoon of effervescent music, superb vocalism, and enchanting comedy.

Early 20th century Russia was a tremendously productive period in music history. In the ballet The Golden Age, Shostakovich ironically depicts the meeting of soccer teams from the Soviet Union and the West. His imagination fired by technological innovation, Mosolov imitates the sound of an iron forgery in his ballet music named Steel. Myaskovsky described his Tenth Symphony as "so massive that it seems to be made of iron." Rachmaninov's Third Piano Concerto, in contrast, is pure romanticism. Pianist Boris Berezovsky is featured.We’ll also be treated to Beethoven’s 5th Symphony. Hosted by Rick Fulker 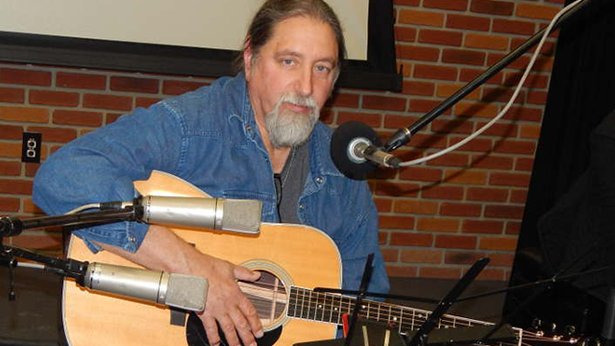 Hazleton-area singer-songwriter Michael Dutz is a long-time veteran of the Homegrown Music series, first as a bassist with the Sterling Koch Force, and more recently as a folk-style acoustic artist. This edition of Homegrown Music features an all-new collection of original songs in a solo setting.

Shakespeare’s work has inspired many composers. Giuseppe Verdi set three of the Bard’s plays to music: Falstaff, Othello and Macbeth, his first setting of Shakespeare. Placido Domingo takes on yet another baritone role as the title character. Ekaterina Semenchuk is the manipulative Lady Macbeth and Ildebrando D’Arcangelo is Banquo. James Conlon conducts.

Mahler Chamber Orchestra is a "nomadic collective" of 45 top musicians from 20 countries who get together for tours in Europe and worldwide. The self-governed orchestra has in fact performed in 35 countries on five continents. The collective of nomads made a stop at the Beethovenfest in Bonn - and swept the audience away with their musical insight and momentum. Violinist Pekka Kuusisto tackles Beethoven’s Violin Concerto. Also on the program: Arnold Schönberg’s Ode to Napoleon - and Beethoven’s Seventh Symphony. Rick Fulker hosts.

The Cost Of Free: Casper Pays A Price For Generous Mattress Returns 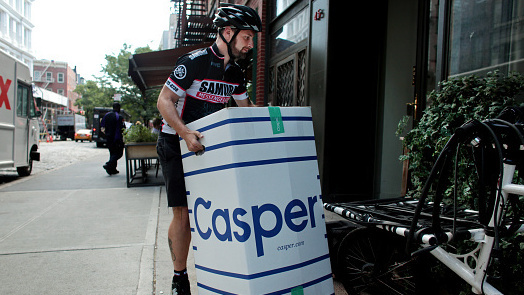 Casper changed mattress shopping with the promise of a 100-night "risk-free" trial and easy returns. Now the cost of...

Dass, who died Dec. 22, was a practitioner of Eastern-inspired philosophy who became interested in the religious...

Eminem Releases Surprise Album, 'Music To Be Murdered By' 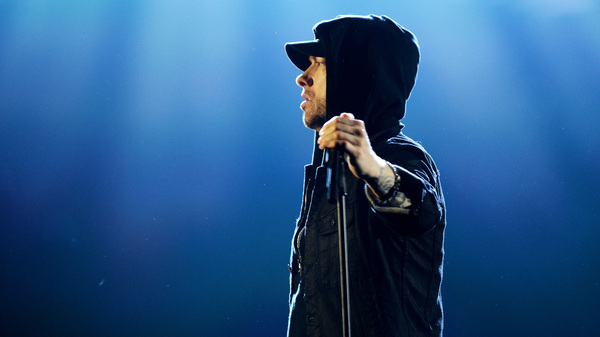