Boxing coach teaches people with Parkinson's to fight back

Kathy Reap is a boxing coach who owns Rock Steady Boxing, where she teaches people with Parkinson’s to fight back. She visited Telespond Senior Services in Scranton to teach a class.

“If you’re going to have to exercise for the rest of your life, you better make it fun,” Reap said. “We have different classes at different speeds and abilities. If you came to some of our faster classes, you might not even realize they have Parkinsons, because they’re running, jumping, hitting the bags hard.”

Telespond is a senior day center in Scranton.

“We’re open five days a week, Monday through Friday, and they can come here and interact and socialize. And that’s really what they need.”

Community Outreach Coordinator Brian Hughes invited Reap to teach a class to seniors, even if they don’t have Parkinsons.

“I thought that the seniors here at Telespond could definitely benefit from this,” said Hughes.

The CDC recommends that seniors regularly exercise to maintain muscle strength and balance.

Parkinson’s is a chronic progressive neurological disease in which a person’s brain doesn’t produce as much dopamine that it should. The effects on the brain have a large effect on the body.

“They slowly start losing ability for things like they develop a tremor, but not everybody has a tremor, they develop rigidity or stiffness in their trunk and their body, they move slower, they have problems with balance,” said Reap.

According to the Parkinson’s Foundation, exercise is essential for maintaining balance and strength, and studies have shown that two and half hours of activity weekly help to slow the progression of the disease.

“It’s not boxing in itself that slows the progression of the disease down, it’s the intensity of the exercise. So it’s being able to work at a pace that’s not self-selected, having a coach saying, ‘come on you can go a little harder,’ and you’re sweating and you’re breathing hard. So what sweating and breathing hard looks like is different for different people. Some people can while sitting in a chair and others need to run around the gym. So we work at your level.”

The Parkinson’s Foundation recommends aerobic exercises and balance, flexibility, and strength training. Reap says boxing can offer a more rewarding and exciting workout for some.

“Most people stay with us because the disease doesn’t go away,” Reap said. “Physical therapy is extremely important and I tell people to go back for a tune up or start with some therapy. But therapy is always a short term thing and then they need to learn to continue those benefits that they gained, but with the group fitness, it’s easier to keep the progress that they made.” 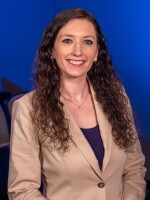