Latino voters look beyond immigration, and hope candidates will, too

As midterm elections approach, the conversation around Latino voters has come into focus yet again. And while politicians attempt to compete for the "Latino vote" in battleground states, the nuances and complexities within the community are often erased in the process.

Like most other voters, Latinos are also not single-issue voters. According to the Pew Research Center, the economy remains the top issue ahead of midterms for Latino voters polled, followed by health care, education, violent crime and gun policy. Immigration stands in ninth place.

While immigration continues to be an important threshold issue for Latinos, politicians often make it the singular issue to attract and potentially sway Latino voters.

Connecting with Latino voters does not come with a one-size-fits-all approach, so we asked Latinos themselves what issues they wish politicians would focus more of their attention on ahead of the midterms. Their answers spanned from the economy and inflation, to gun control and greater resources for Puerto Rico.

Reader submissions have been edited for clarity and length.

"My experience is that the Latino community is not immune from the same economic worries that most are forefront to most Americans. Many are small business owners — restaurants, construction, landscaping, services in general, as well as of course professional jobs that don't get the benefit of tax credits and capital gains.

"Also, because family nucleus is also a hallmark of our culture, taking care of family members who are not doing well is an expectation. ... The economic stress is very real and there is no generational wealth if you are one or two generations into the country."

"The gun issue is huge for me — as parent, as a citizen. Semi-automatic weapons have no place or need in our society, regardless of age. An age ban won't fix the problem. It's way too easy to get guns in the U.S.

"Then there's the so called 'gun lobby.' We live in a society where the money and influence of gun manufacturers is more powerful and important than the safety of our citizens. It doesn't make sense that I need to worry about sending my kids to school because a troubled individual with whatever mental issue decides to get weapons and shoot out a school or a movie theater. ... I never shot a gun in my life and I am very proud of it."

"Education is such a big part of our culture. Most Latinos are huge on making sure their kids attend school, and college is such a big goal for most Latino parents. As a parent myself (my kid is 8 years old), and after living for 10 years in Washington state and now for the last 1.5 years in the state of Florida, I realize how different education is across the country.

"And yet, it is not very much addressed by politicians, especially in swing states where that could be an important part of who we vote for. ... I would love to see more politicians and local governments working together to give these schools MORE funds and not less based on standardized testing."

"... For many Mexican-Americans, higher education is extremely valued not only as a means to move up in the world, but to have more opportunities. We have our parents or grandparents immigrating to the U.S. to provide their children and grandchildren an avenue to access higher education and more opportunities. For many, college tuition increases make it nearly inaccessible."

"Inflation is at the highest rate in over 40 years. This is a serious concern for most Americans, but especially marginalized communities. A recent analysis from the Federal Reserve Bank of New York showed that Latinos and Black people have been more affected by inflation than other groups.

"People are concerned right now in this moment about affording the most basic needs of food and shelter. Here in Los Angeles — where we have a high Latino population — the homeless crisis is spiraling, gas prices are over $6 a gallon, and groceries — which were already expensive — are more costly now. I feel that this matters most to Latino voters because many are trying to support their families and simply survive in this environment."

"Inflation is at the top of my mind because I'm still living with my family and saving to move out has been difficult because of the rising cost of living. Finding a decent apartment at a reasonable price in the DFW area has not been easy.

"In terms of the Latino community, inflation has impacted the ability of households to provide for their families. Working hard to provide for the family is a central tenet — at least in Mexican culture — and it's difficult when those costs are rising and making that difficult."

"I wish the plight of the Puerto Rican people was addressed. In 2022 it is disgusting for the U.S. to be one of the few countries to actively have colonies without representation.

Every single year the U.N. has called for the decolonization of Puerto Rico. It is insane that it was illegal to fly the bandera flag and a crime to be involved in an independence movement [it was illegal as recently as the 1950s]. These people are also Americans, but no one cares."

"See it through that the money given to Puerto Rico after the storms is actually used to improve the infrastructure to withstand the next great storm."

"I am a Hispanic woman and I live in a red state that has famously supported taking away rights that I consider fundamental. I wish the politicians would fight for fundamental rights like access to health care, privacy and so many other things that seem to be being denied.

"When it comes to access to health care, there should be focus on how to make it affordable to more in the community. I know that abortion and the health care surrounding it is an important part of the conversation, but it is not the only part.

"This election circuit seems to be mostly about legalization, both abortion and marijuana. ... I don't want promises to legalize, I want real change to infrastructure."

"For 2021, Gallup shows that 21% of people in the United States classify themselves as being no religion. This has been noted many times when discussing religion in the United States but, when discussing religious freedom or when reporting on conflicts where someone is stating that their religious freedom is under attack, the discussion is never taken from a neutral point.

"The concern that I have with this argument being used is it works towards creating a precedence that favors a religious view of a particular group, which can help a certain religion to be considered a standard. I believe that a question that needs to be asked when discussing an argument of religious freedom is, 'How much will this infringe on another person's right to be (or not to be) religious?' "

"I've visited the fields and trailers my family worked and lived in, cooking over a fire because there's no electricity or running water in their 'accommodations.' "

"Focusing on revamping and scientifically addressing infrastructure issues in education and public transport should be top docket.

"I am a firm believer in the power of capitalism. Equality of opportunity and regulations encouraging market competition are the two most critical components for growing the economy and stabilizing society. Education in the U.S. has lagged behind fellow developed countries, and by scientifically approaching the American curriculum to be internationally competitive for the 2020s will have the most outstanding returns on investment. That is why education is essential to me, as I believe without it, my parents' immigration to the U.S. would have been for nothing.

"Public transport is a perfect solution to both the climate and connecting our cities. This promotes cross-economic growth and dramatically reduces the need for individual motor vehicles. As a Floridian, I cannot stress how annoying it is. I cannot take a 2-hour train ride to Miami and have to drive 5 hours from Gainesville."

"I live in a major metropolitan city. I care about infrastructure, education, and my civil rights, why aren't politicians who want the 'Latino' vote talking to me about that? Why aren't they talking about how being Latino negatively affects so many aspects of someone's life, their education, their job prospects.

"Sometimes I feel like politicians don't want a voice or to truly represent me, they just want my vote by pandering. I don't identify with a politician just because they are Hispanic or Latino, I want politicians to make an effort to actually know their community and the challenges they face."

"I believe what has emerged as the most pressing contemporary issue is, not surprising — Voting. Every effort needs to be made to strengthen the right of every age eligible citizen to vote and not have their vote diluted and subverted by gerrymandering, neo-Jim Crow measures or other subversive forms of scheming. Individual state legislative action that erodes the right to vote is a call to return to an Articles of Confederation form of government, which didn't go so well."

"I wish they [politicians] would stop demonizing us. Many Latin Americans have been in this country for generations. We are an important part of the stability of this country. We pay taxes, contribute to our communities, and create many jobs and businesses.

"It is time to create fair immigration policies that reflect the massive contribution we bring to this country. Without Latin Americans, I worry deeply about the ability of our country to grow and stay competitive in the global community. Without these policies, America will become irrelevant and shut out a crucial source of entrepreneurship and innovation."

"While Republicans pander to the conservative religious values traditionally associated with Latin Americans, and Democrats act patronizingly toward us, I wish more politicians understood there are many who stand vehemently against the hate, racism and sexism within our communities.

"A new generation of Latin Americans are throwing away the antiquated beliefs of their parents and grandparents, and committing themselves to working tirelessly on behalf of progressive values from racial justice, to bodily autonomy and gender equality."

"As a Latino/Hispanic, most good-paying jobs (and career advancement) tend to be in affluent, whiter neighborhoods. For example, where I live, the majority of jobs are low-paying jobs ... and don't come with benefits. I would like to live and work in my community without having to travel long distances.

"I have a master's degree, and I am unable to find a job that would provide me with career advancement. I worked for a variety of jobs from the grocery store, to government and non-profit sectors. I was not able to move up because of fierce competition and most of these jobs — and career advancement — tend to go to whiter individuals. Despite having an advanced degree, I feel like I am not taken seriously by employers. There seem to be implicit biases that hurt us Latinos/Latinas' job prospects." 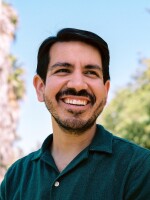 Pablo Valdivia
Pablo Valdivia is an Audience Editor at NPR who is focused on elevating and telling Latino stories across digital, radio and podcast. He also develops strategies to help call in the community across the network and works to ensure that Latino voices get the visibility they deserve.